Imagine if you could learn from communication experts on how to master the art of public speaking through speech contests. Every Thursday, I invite speech champions who have crushed this challenge to share their stories, from competing in their first speech contest to becoming a prominent speaker who can captivate and motivate a diverse audience. If you want to excel in speech contests and become a better communicator, then keep reading to learn how to craft a memorable speech, command a room, and connect with your audience.

Today’s featured champion is Marianna Pascal of Pascal Communication and Language Training. Marianna is an award-winning speaker, best-selling author, and corporate trainer. Her TEDx Talk has been seen by a whopping 20 million worldwide! In 2009, her district’s Humorous Speech Contest winning speech “Local English or Standard English” went viral, and in 2019, she competed in the International Speech Contest and was one of 14 finalists in the World Championship of Public Speaking.

If you’re interested in learning how Marianna uses “aha moments” to create engaging speeches that everyone can relate to, then this interview is for you.

1. Can you tell us about yourself and your line of work?

I help professionals and organisations to speak, write, and present clearly. I’m a global speaker and corporate trainer.

I’m pretty excited to say that my TEDx Talk titled, “Learning a language? Speak it like you’re playing a video game” is one of the 90 most popular TEDx talks in history!

My  specialty is overcoming the challenges organisations face when employees and other stakeholders come from diverse backgrounds and languages. Finally, I write a best-selling book series that teaches really useful English for work and daily life. It’s sold 100,000 copies in Malaysia and Singapore alone!

2. Take us back to your first speech contest. Why did you enter it and what happened?

OMG! I lost track of the time. There was a red light to tell me I had 15 seconds left, and for some reason, I kept talking because I was waiting for it to turn green! Totally embarrassing!

3. What tips do you use to select a speech topic that will be relevant to a diverse audience?

Well, I don't really imagine that there is such a thing. We're all bound by the same search for meaning, the same pain, the same need to be valued. And these are the feelings we want to bring out in an audience. So, I don't worry about diversity.

Instead, most of my speeches, I'd say, have come from aha moments in my life—something that I’ve discovered, usually quite by accident, that I know will resonate with other people. So I would say start with those aha moments in your life, and widen the meaning in a universal way that everybody will be able to relate to.

For example, I wrote a very important speech for me on the subject of loneliness. It was about my own experience with it and an aha moment that I had in Spain on the top of a mountain. Everybody in the world can relate to loneliness, whether it's being a solopreneur and working at home, whether it's being part of a huge organisation and feeling inconsequential or whether you've recently lost someone important in your life.

In other words, I can tell my own story, but I know everybody in the world will understand the aha moment and the core feeling.

4. Take us through your speech writing process. How do you usually create a speech?

From there, I never, ever write down anything. I stand up in my living room. And I imagine telling the story in a way that would help other people to discover the same aha that I discovered as it relates to their life. And I simply talk out loud and I do it over and over again. And the more I do it, the more it seems to take on a life of its own. A natural flow evolves. I would say it's a highly intuitive process, its flow.

The speech sort of writes itself as I do it, and by the time it’s taken shape, I don’t need to memorise anything. I just know it!

This probably wouldn't work for everybody, but it works for me.

5. What are the most important components of a memorable speech (content-wise and delivery wise)?

I'd like to focus on one area of this question that I think is drastically underused, and undervalued. And it's to do with a delivery component. One of the greatest tools that we can use is creating anticipation in your audience. I'm not simply talking about a suspenseful story. I'm talking about leading the audience to anticipate the next thing I’m going to say. Then using pauses, spaces in your speech, to enhance that anticipation.

Let me explain a little further. I could tell a story about a character. And I could bring them to a point in the story where they know exactly how the character is going to react or what the character is going to say. Or they can guess what the character’s about to do. So the audience is waiting for it. And then I can hold that pause. I can enjoy that moment with them where they're just waiting and dying for me to say the punch line or the climax or whatever that moment is. Sometimes it’s the opposite of what they’d anticipated. But whatever it is, when I finally say it, they love it, because they were waiting for it.

It depends on the situation. I either wing it or I rehearse a kazillion times. Last night at my Toastmasters meeting someone cancelled 10 minutes before the meeting. So I said, “I'll do a speech.” Within five minutes I’d googled the speech project I needed to do, linked it to a story that I had experienced recently that was interesting, decided how to frame it so that it had a deeper meaning, and mapped out the three main sections in my head. Then I just delivered it with those three parts as a roadmap. And it went really well.

On the other hand, when I'm preparing for a contest. I rehearse one bazillion times. Nothing is more important than rehearsing!  And that doesn’t mean sitting there with your script. It means doing it out loud to an imaginary audience. Often I rehearse with two standing lamps as my practice audience. They’re a very silent audience.

7. What tips do you use to stay calm, composed, and confident while delivering a speech?

There is one physiological area of control that's my go-to area to become composed, calm and confident and that is breath. Before a contest, I begin controlling my breath. I sit in a posture that lets my breath flow in and out without constriction. I focus on breathing low and slow in my diaphragm. This completely centers me. I call it my swimming breath. The calm follows because my body is giving my brain signals that I’m calm. “Look,” says my brain. “She’s breathing slowly. She must be calm!”

8. Tell us about some of the lessons you have learned from competing in speech contests.

I learned a valuable lesson last year at the World Championship of Public Speaking in Denver where I was a semi-finalist. I prepared a new speech. And I practised it in front of a few audiences. I had asked these audiences to give me feedback after the speech. In other words, when I delivered the speech for the audience, it was with the intent of figuring out how to improve it.

I deeply regret that. Their comments were good, but the whole experience kept me in my head all the time, thinking and thinking about using their feedback. It never really gave me a chance to play around with the speech without that pressure of preparing a contest.

If I were to do another world championship, I would make sure I use the speech that I had delivered first for the enjoyment of it and delivered well.

I would never again create a speech for a contest. So I would say, if you're going into a speech contest, use a speech that you are comfortable with already that you feel good about.

Interesting question. Well, I would say, the tips did not come from someone else they came from discovery through my 25 years of work training employees. The best tip I’ve learned from my work  is that listening is much more important than speaking.

Another discovery over the 25 years I’ve been helping organisations is that  sometimes those people for whom speaking comes naturally and comfortably are not the best communicators. I've seen people who know how to use their voices very well. They can appear to be great communicators. Often others let them do the talking because they are good at it, and as a result, it can become more of a one-sided show than a genuine meeting of human spirits, which is what communication is at its best.

10. What tools do you recommend using to prepare for a speech contest?

If you want really useful English for work and daily life, check out my e-books. They are perfect for non-native speakers wanting more impactful language in their speeches. Here’s the link: www.mariannapascal.com/ebooks

11. Where can we find you and link up with you?

You can find me through my website at www.mariannapascal.com.

If your organisation would benefit from employees being a cut above the competition in the way they speak, present, collaborate or write, please do reach out! It would be my honour to serve you.

Here’s the link to my TEDx Talk titled: “Learning a language? Speak it like you’re playing a video game.” It’s been seen by 20 million people!

Are you planning to compete in a speech contest? If so, which of Marianna’s tips do you plan to use to prepare for it? Share your answers with us in the comments below! 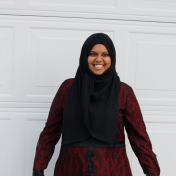 Got my mic today! Alhamdulillah. I’m excited to